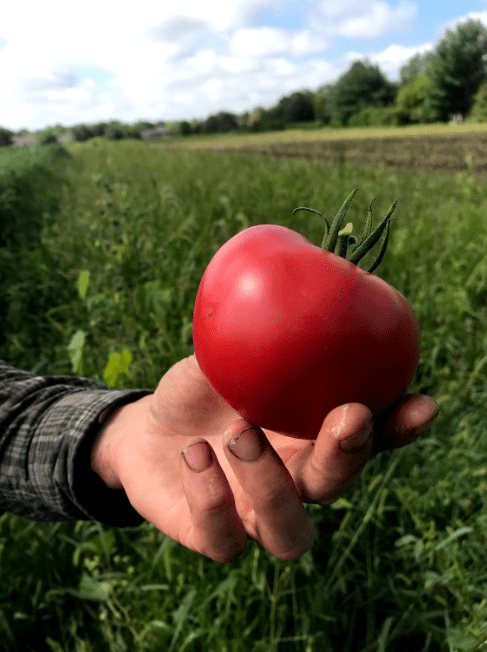 Tomatoes, you either love them or you hate them. When I was young, you could not get me to eat a tomato to save your life. I once sat at the dinner table for 2 hours refusing to eat one. All I needed to do was eat one bite and then I could be excused, but no, I was NOT putting that nasty thing in my mouth. It turns out I had a lot in common with my European Ancestors. When the strange food arrived from the new world, they too had reservations about the delicate food. 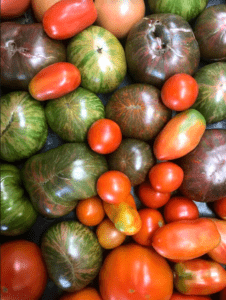 The tomato originated somewhere in the Andean mountain range. There is still a lot of speculation about the origin of tomatoes and how they spread across the world. What we do know from records is that wild tomatoes were originally blueberry sized fruits before they became domesticated. The exact domestication is still debated, but based on migration patterns of the Andean people, it is believed to have traveled from Ecuador up to the Aztec city Tenochtitlan (modern day Mexico City). There it was given the name tomatl, which means “plump fruit”. After being cultivated by the Aztecs, the tomatl grew to the size of today’s cherry tomatoes. It is believed that seeds from these tomatoes were taken back to Spain by none other than Hernadodo Cortes in 1521 (The dreaded conquistador in the DreamWorks movie “The Road to Eldorado”. A highly underrated children’s movie that I give two thumbs up).

Based on the original name given to the tomatl by Spanish and Italian farmers, Pomid’ oro or yellow apple, scientists believe the first tomato to arrive in Europe was actually yellow, not red. Although the tomato was welcomed by Spanish and Italian farmers, who lovingly cultivated it for many years to create new shapes, colors, and flavors, it was not widely accepted by other European countries. Part of this was due to its relation to the nightshade family, which was known for its toxic family members. At the time, many believed the entire plant was poisonous and decided to use the delicate fruit as an ornamental plant and table decoration instead of food.

Social class also influenced acceptance of the novel fruit. Many households of nobility and upper-class citizens refused to eat the fruit from the new world as there were rumors of people going mad after eating tomatoes. On the other hand, peasants would eat their tomatoes on wooden plates without any repercussions. Unknown to the upper class and the world, their expensive, fabulous pewter plates were made with lead. When the acidic juices from the tomato came in contact with the plate, the lead was leached out, slowly poisoning the individual.

FUN FACT: The first recorded tomato sauce recipe was in 1692

There are other small folklore and tales that caused the tomato to be shunned by society. People claimed it to be a hallucinogenic and an aphrodisiac, which made it unsuitable for puritans. It was also named Wolfpfirsich (Wolf Peach) by the Germans for two reasons: One, it was round like a peach and two, it was believed that members of the Nightshade family (aka Wolfsbane) could be used to summon Werewolves. Eventually, around 1880 with the invention of pizza (credit to Naples), the tomato became widely accepted by the European nations, but it still struggled in North America.

FUN FACT: The creation of pizza was credited to Raffaele Esposito in Italy. He created a patriotic pizza that was red (tomatoes), green (basil), and white (mozzarella) to honor Queen Margherita of 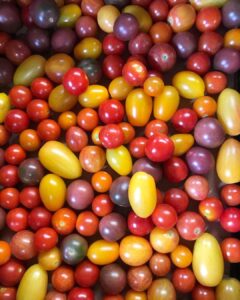 The first proclaimed backer of the tomato in the United States after European colonization was our President Thomas Jefferson in his famous Monticello gardens. The second proclaimed backer was Robert Gibbon Jason who sat outside a courthouse in 1820 and ate a basket of tomatoes in front of a crowd claiming he would not get sick or die. To everyone’s surprise, he lived! Even with those early supporters the tomato did not have a strong hold in the United States until the late 1800s with the introduction of Joseph Campbell’s famous tomato soup in 1897.

FUN FACT: The first recorded tomato chowder (soup) recipe was created by Maria Parloa and published in her 1872 cook book: The Appledore.

I will admit, I have also joined the tomato fan train. I love to eat them right off the vine, in pastas, or as a cottage cheese flower for a snack. I get BEYOND excited to pick out new varieties to grow in my garden and lose my mind over the tomatoes at our farm and the farmers market. I can’t help myself.  How was I converted you may ask? By an unknowing accomplice of the tomato; my friend’s parents. They made us sandwiches for lunch, and me being a polite guest could not complain or take off the tomato from my sandwich. I took my first bite and I can only imagine how wide my eyes got. It was the most delicious tomato I have EVER eaten in my ENTIRE life. I asked them where they got the tomato, thinking it was from some fancy expensive store, but no, they told me it was from their backyard garden.

So, there it is my friends, if you want to know what a tomato should really taste like get one from our farm stand or at your next farmshare pick up or, if you’re feeling really wild, try growing a plant in your backyard!