Farming, in the spring, to me, is a constant tension between patience and push. There is a patience learned in the winter months, particularly in this climate, where winter is a season of planning, preparation, and education. This is when the farm is at its most superficially perfect, laid out clearly on paper and in plans. Then, there is the push of warm weather and elongating daylight; the season begins and awakens a nervous energy that can be hard to tamp down. If I could do everything for the season in a day, I would! But, you can only work so far ahead of your plan, as farming is fundamentally and moreso than other pursuits, an essentially chronological exercise. 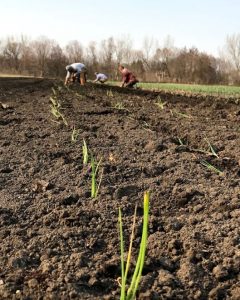 I had patience this past spring with, in my opinion, the single most important task I am entrusted with, and that is hiring a crew. That patience has already, a month into their season, paid off in spades. Jackson, Kelsey, and Annika have all hopped in with a willingness to do the work that needs to be done–which is the hardest thing to teach someone. Even the stuff that’s easy to teach–the dexterity to transplant, the knowledge of which seeding trays to use for what crops, and the layout of the farm–it sometimes seems that they took a prep course to get themselves ready for the season.

The afternoon that I realized we definitely have a great crew this year was our potato day, when we pushed to plant 15 beds of potatoes. That’s roughly 30,000 individual potatoes punched deep into the ground to grow tubers into the late summer and early autumn; after lunch, we switched up our plan to stay late, drive faster, and have everyone pitch into finishing the task before the final April snow. The three of them hopped right 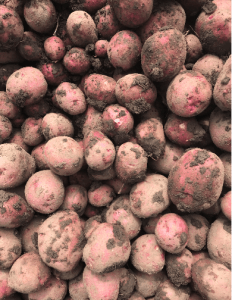 in, interchangeable with Dan and Jess and I, and just as invaluable. Don’t worry–we took a half day for snow the following day.

Of course, the spring hasn’t been entirely magnolia blossoms and singing birds; at the beginning of this month, we began having issues with our well pump, which is buried nearly 300 feet underground. By the beginning of the following week it was clear: the well was broken. Fortunately, Mark Neely is our go-to person for the well, and he came, diagnosed, and fixed the problem within a week. Now that we’re able to water, this dry spring has finally started to rain a bit; seedlings and transplanted plants out in the fields seem to be quite grateful for the break in weather, and we are, too.

I said at the outset of this blog post that winter is when the farm is superficially perfect, translated right over from glossy seed catalogs and trendy farming books and podcasts; in January, we are chock full of ideas and optimism and hope for the coming year. Now, at the end of April, the superficial veneer of perfection has begun to chip away; we’ve had mechanical issues and seen a few more rabbits than we would like to–but, in the fading away of that superficiality we’ve begun to settle into a rhythm that makes the farm feel more fully alive.

As I write this, our team is potting up and transplanting plants for the Plant Sale and for the field, and we’ve just cleared out the South Greenhouse to make room for more trays. That is the cycle and the rhythm of the work; a greenhouse is cleared out, then filled back up. A seed is planted, and 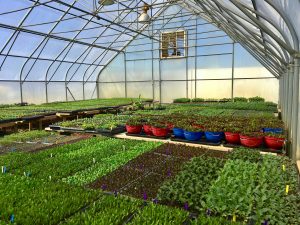 then harvested. A platonic ideal of the farm is replaced by a far more fulfilling reality. The days shorten, until in spring, they begin to grow long again.