Hike Bundling in the Shawnee Hills 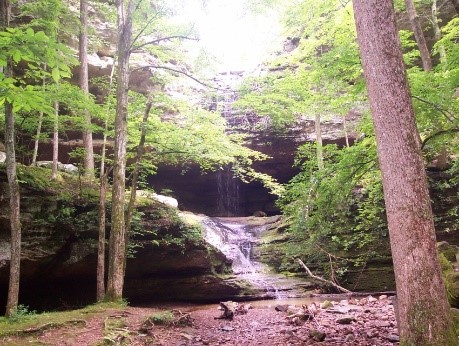 Have you ever visited the unglaciated Shawnee National Forest (Shawnee Hills) area of southern Illinois? It’s truly an amazing place with so many natural places to hike and explore. It’s almost overwhelming the number of different and unique places down there. For us “flat-landers,” it doesn’t resemble Illinois as we know it.

For the past several years, my wife and I have made a point to stop and explore southern Illinois in our travels further south. We would leave a day early to explore a new park or natural area and hit a winery or two along the Shawnee Wine Trail. We have even made trips in the spring for a few days just to see the obscene wildflower displays in the many forests down there.

Last month we decide to spend a week in “the hills” and ventured down for our anniversary. February down there isn’t that much better than it is here, but we like to go somewhere fun each year. We stayed in a cabin at Giant City State Park. I highly recommend that. Their cabins are nice and the food in the lodge is really good, especially the family-style fried chicken dinner!

Here are the places we explored and “bundled together” over the course of 6 days:

Giant City State Park
As mentioned, the cabins and CCC-era lodge are wonderful. The people are so friendly and make you feel special. The nature/visitor center is also pretty cool to explore, but the nature trails are what we like. The Giant City Nature Trail, the park’s namesake, is a must. The weird geological sandstone formations are what gives this place its name and wonder. Also check out the Trillium Trail in the park’s Fern Rock Nature Preserve. In the spring the wildflowers along this trail are stunning, especially the giant white trillium. Given that it was still cold down there, we saw lots of frozen waterfalls and ice hanging from the cliffs and rock formations. There are many more trails in Giant City of varying lengths to explore. 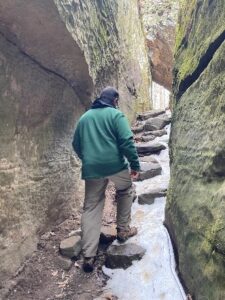 Ferne Clyffe State Park
This is where the Shawnee really exhibits its unique sandstone formations, caves, and rock outcroppings. The 100-foot waterfall at the end of Big Rocky Hollow Trail is the best! Other trails worth exploring are the Hawk’s Cave Trial, Rebman Trail, and the Round Bluff Nature Preserve Trail which was pretty cool, as well. We were impressed by the vast amount of native hydrangea shrubs growing right off the rock in the shade. 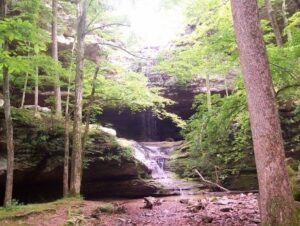 Garden of the Gods Recreation Area (National Forest Service)
A must see for anyone wanting to be in awe with nature. You stand on top of this huge sandstone bluff with really fascinating formations, and you can see forever. Fall is the best time to be down there and stand over the valley and witness nature at its most beautiful time. The short quarter-mile trail takes you on top of the bluff in a safe manner, but you still need to be careful. 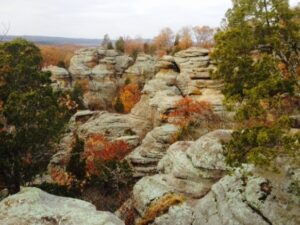 Garden of the Gods in fall

Trail of Tears State Forest
This is more rugged hiking and the trails are not marked well, but you can hike any of the fire breaks, which also double as trails. We walked the 3- mile “cross country ski trail.” The state forestry land managers did a good job of opening up the oak and hickory forest on top of the ridges, where the trails meander, and we saw lots of red-headed and pileated woodpeckers, which was super cool. The red-shouldered hawks were also squawking. 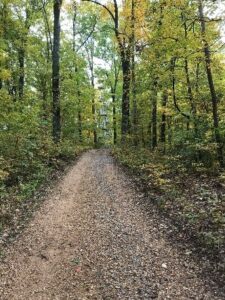 Rim Rock Recreation Area (National Forest Preserve)
This was our lovely 60-degree day we experienced. The Lower Trail goes to a cool cave (Ox-lot Cave) where early lumber-workers kept their oxen used to pull out the large tree logs. We saw lots of hanging ice from the bluffs as it faced north and stayed shaded and very cool. This trail, very scenic and running through a ravine, also connects to the Pounds Hollow area. The Upper Trail goes past an ancient stone wall built by Native Americans hundreds of years ago. 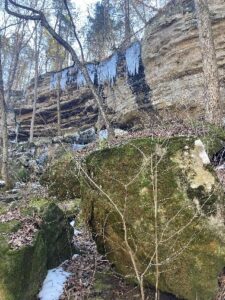 Tunnel Hill State Trail
This is an abandoned rail line that runs 45 miles from Harrisburg to Karak. We wanted to actually see the tunnel that was blasted through the solid bedrock in 1929. Check out the picture below. As a rock enthusiast, I was impressed with the shale outcrops along the trail and the hanging ice. 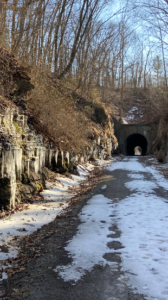 The “tunnel” and ice hanging from shale

LaRue-Pine Hills Natural/Ecological Area (National Forest Service)
This was really awesome. Almost to the Mississippi River, this unique limestone cliff system marks the eastern valley wall for the Mississippi on the Illinois side. At it’s base, the infamous “snake road” was open. This road is closed in spring and fall to allow for the safe travel and migration of thousands of snakes, salamanders and other herps traveling from the cliffs and forest ecosystems on the east side of the road to the vast wetland complex on the west side of the road. This is truly one of the most unique places in the world and I can’t wait to go back and witness this migration, mostly performed at night, which includes venomous snake species as well! 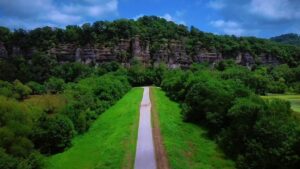 Cache River State Natural Area
If you go further south to the tip of Illinois near the Ohio River, the ecosystem really changes. This area, the Cache River Wetlands, is the northern-most reach of the great cypress swamps of the southern states. Yes, we have cypress swamps like in the Louisiana bayou in Illinois (without the alligators)! Visit the Barkhausen Wetland Center to learn about this unique Illinois ecosystem and walk the boardwalks. I need to return to kayak the water trail meandering through the centuries-old cypress trees. This multi-agency effort to preserve thousands of acres of this vanishing ecosystem is impressive and gives us hope that conservation and preservation of large areas can become a reality. 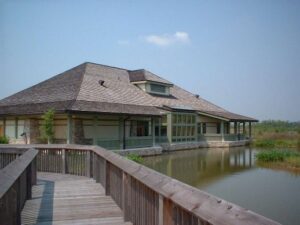 There are so many other cool places down there, like Bell Smith Springs and the various wilderness areas in the Shawnee National Forest, I could go on and on. If you don’t mind traveling 5-6 hours south, you’ll discover a part of Illinois that you will enjoy and remember forever. Bring the kids, or not, and enjoy the wine trail.