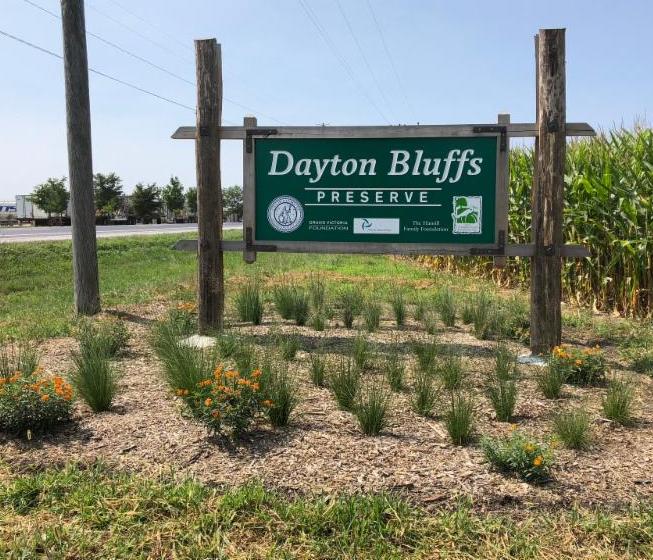 Most of the time when we at The Conservation Foundation are involved in preserving land, we end up actually owning the land for only a short time while the municipality, forest preserve or park district we are partnering with gathers grants or funds to purchase it from us, what we call here a “buy-and-hold”.  But sometimes, a property comes along that is precious and in need of immediate protection, and we purchase it outright.  That’s what happened in 2013 with the 253-acre Dayton Bluffs Preserve near Ottawa in LaSalle County.  Our partnership with the City of Ottawa enables us to keep it open for public enjoyment year-round, but we retain ownership of this natural wonderland and hallowed ground. 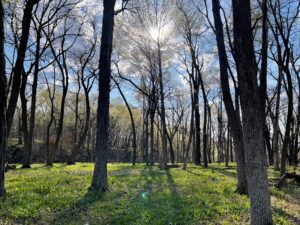 Located along Route 71 just north of Ottawa, the Dayton Bluffs Preserve is a part of Starved Rock Country.  It’s a “have to be there to feel it” kind of place.  The property runs along the Fox River for a mile, its upland portions giving way to deep and dramatic ravines that run down to the river.  Whether you’re seeking a gentle, peaceful nature experience or a true adventure, you can find it at Dayton Bluffs!

What you can also find is a direct connection to human and natural history.  Dayton Bluffs lies on the front edge of the Marseilles Moraine, shaped by the last period of glaciation.  The Upper Illinois River was most recently shaped by the Kankakee torrent, a massive surge of glacial meltwater which scoured out the Illinois River Valley and allowed many of its tributaries, including the Fox River, to form.  Dayton Bluffs would have been completely inundated by the torrent, lying under glacial Lake Ottawa.  When the lake drained and additional glacial meltwater pulsed down the Fox River about 17,000 years ago, the terraces, steep bluffs and ravines we see today were formed.

Native Americans were the first human inhabitants of what is now the Dayton Bluffs Preserve.

The most visible evidence of their time on the land are the burial mounds situated north and west of the parking area. Approximately 27 mounds were constructed during the time they lived on the land, from 1000 to 1500 hundred years ago.   Anthropologists call this the Late Woodland Period.  During that period, the bow and arrow replaced the spear and atlatl in hunting. The “Three Sisters” practice of farming (maize, climbing beans and squash grown in tandem) was implemented.  The communities who sheltered at Dayton Bluffs probably migrated to warmer climates in winter months.  A common question is “what tribes were they?”  Since these people lived before recorded history, no tribal names can be known!

In 1964, a team of amateur archeologists concluded that some of the mounds appeared ceremonial, that many of them were burial mounds.   Other evidence of Native American life at the Dayton Bluffs are the spearheads, arrowheads, and grinding stones that have been found, as well as chert shatter, shards of the stone chert, which is not naturally found here, resulting from chipping at stone to make tools and fire.

About a half a mile away from the area of the Native American mounds at Dayton Bluffs is the Daniels Cemetery, which has been restored by Dr. Dave and his fellow Dayton Bluffs volunteers.  The Daniels family were settlers, and many of them passed away within a week of each other, being overcome by a cholera outbreak in 1854.  Though their time on the land was a few thousand years distant from the first Native Americans who lived here, and we are still researching and learning more about those who may have made their home at the Dayton Bluffs in between, we know these varied cultures found shelter and sustenance on these bountiful acres we are the current fortunate stewards of, and are taking their eternal rest in its earth.

This Thanksgiving week, as we celebrate and revere the bounty of the land and the way it brings together all peoples, take a visit to the Dayton Bluffs Preserve!  As you marvel at its towering oaks and hickory trees, consider those who may have enjoyed their shade centuries ago.  As you shade your eyes to see if that soaring bird is one of the American Bald Eagles that frequents the area, know that a Native American, a European settler, and a 2021 grade schooler participating in our Mighty Acorns program have likely done the same, with the same breathless anticipation.  As you respectfully tread the sacred ground around the Native American mounds (please stay on the path) and the Daniels Cemetery, no matter what modern day stresses and strife may be weighing you down, be inspired by the way native peoples lived within the landscape and give thanks for that moment of peace and connection.

We give thanks for the members and donors of The Conservation Foundation, whose support has enabled us to save the Dayton Bluffs Preserve and 35,000 other naturally and culturally significant acres throughout northeastern Illinois.

As an organization dedicated to environmental stewardship, we acknowledge the many native people who were the original stewards of this land. With reverence, we acknowledge the indigenous spirit of everything that is on and in the land.
Native peoples did not choose to leave this land, but now we are working to carry on
the legacy of land stewardship
that was inherent in their culture and customs.

The Dayton Bluffs Preserve is located at 2997 State Route 71 in Ottawa.
Click here for more information and directions!