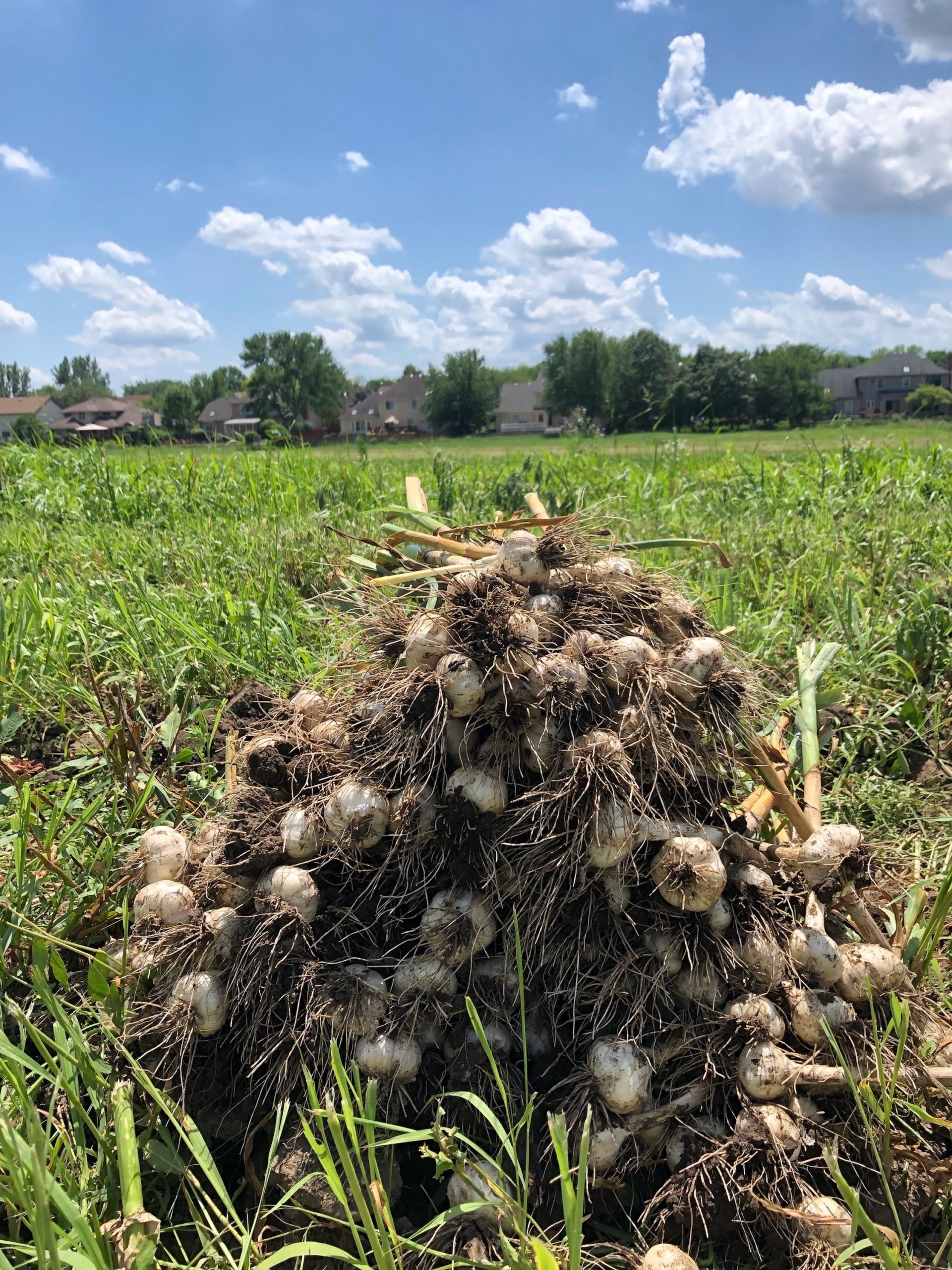 Garlic, Allium sativum, the stinking rose: is it a vegetable, a spice, or a medicine? Is it an onion, a wild leek, or something else entirely? Is it a spring tonic or a storage food for the long Chicago winter? Is garlic really as good as ten mothers (for keeping the girls away)?

This prehistoric plant calls up more questions than answers, and perhaps that explains a part of its wild and ubiquitous popularity; it certainly explains its polarizing possibility as both a supposed cure-all and as an odiferous foil to polite society.

To go way back, garlic shares its status as a member of the Allium genus with somewhere between 600 and 900 other species (sources disagree on species identification), the vast majority of them hailing from the Northern hemisphere. Garlic also shares a family with amaryllis, snowdrops, and daffodils, and is far more distantly related to a huge range of plants from asparagus to vanilla.

In North America, our most common similar wild plants are Allium tricoccum, more popularly known as the ramp, and Allium canadense, wild garlic (confusingly, not the ancestor of our cultivated garlic). In fact, Chicago derives its name from the Miami-Illinois indigenous name for wild ramps, shikaakwa, due to their prevalence along the muddy river running through the area (later named the Chicago River).

The 900 or so species of the Allium genus are so phylogenetically messy (that is, their family tree is a mangled shrub) that it is hard to piece together exactly what the wild ancestor of cultivated garlic is, particularly given that there are so many species that have common names incorporating garlic. However, the earliest evidence indicates that what is commonly known as garlic was first cultivated in Central Asia, perhaps in steppes on the border of China and Kyrgyzstan, somewhere around 6,000 to 8,000 years ago.

Garlic, from its origin in Asia, spread rapidly through trade routes to the Mediterranean, North Africa, India, and eastward to the Pacific coast of China. This is thought to be due to the storage life of a bulb of garlic as well as its odd propagation. Whereas most plants produce seed by sexual reproduction, ensuring a rapid mixing of traits and fast adaptations to the environment, garlic is reproduced asexually by replanting individual cloves in the ground. Carrying a head, or bulb, of garlic then gave travelers the flexibility to eat the garlic or save cloves for planting.

At Green Earth Harvest, we typically plant our garlic cloves, saved from the year before, in late October or very early November, then mulch the beds of garlic with leaves from the City of Naperville. The individual cloves grow roots into the ground and (hopefully) no shoots above the ground until the most severe of winter has passed. Right now, in the first full days of spring, our garlic shoots stand about half a foot out of the ground and face a four month growing season until we begin to pull them for their full bulbs that we all know (and most of us love).

Of course, as any returning shareholders know quite well, we also hand out green garlic and garlic scapes. Don’t panic if you don’t know! I will explain. Green garlic is the immature plant that we pull for our early spring shares in May, superficially resembling leeks. It has a milder taste than mature garlic and can be used as either leeks or garlic would be used in many recipes, even though it has a somewhat different taste than leeks and a totally different appearance than garlic cloves. I particularly enjoy it in green and herb-heavy dishes that both refresh and sustain, like a spring vegetable

Garlic scapes are shoots that the plants send up in late May or early June; they contain both flowers that will produce seeds as well as tiny bulbils that will lead to asexual reproduction for 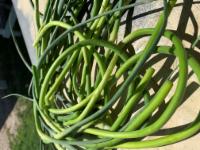 the garlic plant. We pick them before either of these develop. Scapes are found almost exclusively at local and small scale farms and are, to my mind, a delicacy. I absolutely love them pickled (which renders them milder with a lovely touch of sweetness) or cut and sauteed like little garlicky green beans. They can also be grilled and added to a dish, or turned into a garlicky pesto.

We pick these scapes both because they are a delicacy and because it forces the plant to put more energy into its bulb, hopefully creating a larger harvest in the middle of July when our attention turns to clearing the field of all garlic plants.

At Green Earth Harvest, we will drive through the field with a tractor to loosen the soil and then follow through, pulling each and every stalk and piling it high on one of two flatbed trailers, bringing it safely (and dryly) into the barn for a few days, before we begin to tie the garlic to hang in bunches of five in the loft, in order to dry the outer leaves to a papery husk that allows garlic to store for so long. After a few weeks, we spend the time with garden clippers to cut each and every bulb from its stalk, when we finally get to weigh the entire harvest. We then distribute what we have among shareholders in August, keeping for planting about a third of the harvest.

In my opinion, the best three ways to enjoy the stored garlic are to saute it with kale and whole wheat spaghetti in olive oil, roast it and use as part of a salsa (it’s great in salsa verde) or other sauce, or make a confit and spread on a good quality piece of bread (make sure to not store garlic confit more than a week).

As summer goes on, we forget about the garlic, until it gets chilly again in mid-October! We then begin spreading compost for the upcoming planting. The whole crew gathers, just before our apprentices finish their season, and we spend several hours (or a few days) cracking, or separating, garlic bulbs into individual cloves for planting. Then, after plowing the field and preparing beds, we plant cloves in; this year, we planted 19,500 cloves! It is a fitting and phenomenal end to the season for the entire crew.

And then, the cycle begins again. The cloves root, and then, early in the spring, they shoot upwards again, a reminder that days do get longer and warmer too. Green garlic is one of the 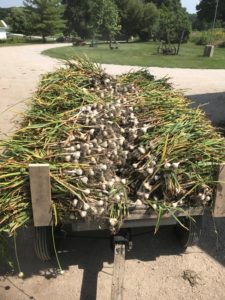 first things that we harvest, a (stinky) breath of fresh flavor after a winter of mass produced vegetables. It’s easy to imagine garlic and its relatives being a spring delicacy of the utmost value to pre-industrial societies, breaking the hungry spell of late winter.

I think this has to be one of the reasons garlic figures so prominently into mythology, including a Korean legend of a bear transforming into a woman after eating twenty cloves of garlic and Koren mugwort (an herb) as well as the practice of putting out garlic in an arrangement for the Persian New Year, Nowruz, as a symbol of good health and medicine.

I also know everyone has at least one person in their life that swears by garlic as a cure for colds and other illnesses. These are difficult claims to assess, but there is some significant research that points towards garlic as potentially: preventing and cutting short common colds, mildly lowering the risk of a couple types of cancer, and decreasing both high cholesterol and high blood pressure in at least some cases. This is not medical advice, I am not a doctor, and neither can be construed as such, but science does seem to echo some of the more reasonable claims our grandmothers made.

Maybe more importantly, to me at least, is the way the garlic harvest, storage, planting, tending, and weeding (weeding is by far the hardest part of growing garlic) ties the rhythm of the farm year together so neatly. In spring, we eat and cultivate. In summer, we eat and harvest. In fall, we eat and plant. In winter, after the last of the storage garlic has run out, we wait, patiently.