Everything you need to know about the Emerald Ash Borer: Part 2

Now that we have covered the basics in Part 1, let’s get a little more in-depth! Besides knowing what to look for and why this is happening, it is also important to know what will happen to the surrounding ecosystem, if the ash trees will ever make a come back, and if the emerald ash borer will ever go away.

To begin, the first question is "What effect on the local ecosystem is occurring because of the loss of all the ash trees from Emerald Ash Borers?"

Since this is a more recent issue, it is hard to know the exact results of this ongoing havoc. However, the results of small studies and past experience predicts that there will be a long-term effect on woodland ecosystems that contained ash trees.

A gap in the woodland canopy due to dead ash trees.

One of these effects is a change in light, water, and nutrients, because dead ash trees no longer shade the woodland floor. This openness in the canopies could completely alter the composition of plant species growing in our woodlands, which would alter the types of species of insects or animals that are present, as well as allow for more invasive species to attack.

If ash trees are unable to regenerate and once again become a dominant canopy tree, sugar maples are likely to take their place in the sky. However, the success of the woodland depends on whether the sugar maples can fill the same functional roles as the ash trees in both nutrient cycling and as a host for invertebrates and animals. Honeysuckle and buckthorn, both invasive species, also have the potential to dominant in those habitats where beautiful ash trees once stood. 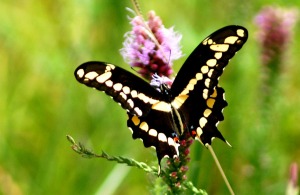 Additionally, native butterfly populations are at risk because some plants that the caterpillars feed on become more toxic when grown in the sun rather than shade.  A study at The Ohio State University is currently studying the relationship between canopy gaps and the giant swallowtail butterfly.

Now that you’ve read all about how awful the Emerald Ash Borer is and what it is doing to ecosystems, you’re probably asking yourself how can we reverse this? Can the ash trees ever come back?

Scientists collected soil samples in southeast Michigan where woodlands have been hit with Emerald Ash Borers for several years now. They were looking for viable ash seeds or germinating ash seedlings. Sadly, they found none, which hints at the fact that these areas have no seed bank in the soil for the ash trees to return again one day. The only way they would ever return is if humans came and replanted them in that area.

However, not all hope is gone. Ash seeds germinate in about 2-3 years, yet some have remained viable for as long as 7 years in lab collections. That means in some areas, EAB may pass through quickly and seeds in the soil will germinate in several years and new ash trees will safely grow. 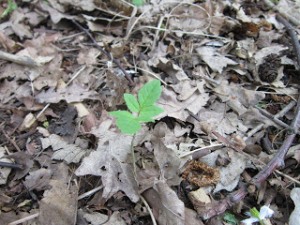 But from the looks of it so far, many seedlings are just getting attacked over and over again.

What scientists are starting to look into now is creating a hybrid species. Asian ash species have genes resistant to EABs, so creating a hybrid with the Asian and North American ash species would hopefully create a tree that has those resistance genes. Since this is a relatively new study, full results have not been found yet. However, their goal is to create a tree that has all the qualities of the native North American species but the resistance genes of the Asian ash.

With the future of ash trees looking dim, our last hope falls upon the Emerald Ash Borer to just disappear. But will they ever go away?

It is possible that EABs will run their course and decline on their own. With their fast rate of consumption, it is only a matter of time until they have overexploited ash trees too quickly and can’t sustain their population anymore. If the EAB populations are reduced enough to allow for some ash seedling growth, then perhaps the two species will reach an equilibrium one day where both can coexist at low population densities.

The braconid wasp, Atanycolus cappaerti, is a parasitoid of the Emerald Ash Borer.

But since we would prefer not to lose most or all of our native ash trees, biological control has come into question. Biological control refers to using other living organisms to control pest populations through ways of predation, competition, etc. In this case, egg or larval parasitoids of Emerald Ash Borers have shown potential to effectively reduce EAB numbers in the long run.  Already, these parasitoids have been released in Michigan and many other states with positive results. Efforts are currently being put forth to increase the amount of parasitoids released.

Or, as mentioned in Part 1, use of insecticides is what many are relying on to save the ash trees and keep away EABs. However, this method works better in city and suburb areas rather than woodlands.

Hopefully one day a solution to the Emerald Ash Borer infestation will be effective enough to bring the EABs to a permanent stop. Just remember to spread the word to others!

All materials and information gathered are from these lists of websites:

To check out insecticide options:

To read about the ecological impacts of EABs (detailed) Wendy Sue Klooster (2012):

To identify your ash tree:

To check firewood movement regulations in your state:

To read more about the Forest Health Technology Enterprise Team and their studies:

To read about what the USDA is researching about the Emerald Ash Borer:

To read about the Illinois Department of Agriculture research about the EAB:

To read about general information on the Emerald Ash Borer:

To read a scientific journal entry about the EAB:

Pictures were taken from Google.