The More, The Merrier 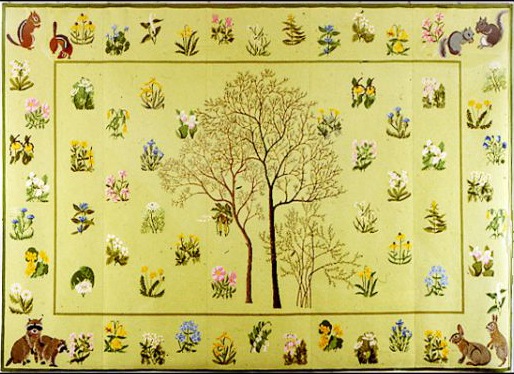 The More, The Merrier
Conservation, Diversity, and The Law of Dependence

Along with inspiring us to make wonderful tapestries, conservation also protects a greater diversity of species – while lowering their chances of becoming extinct. What does this mean for humans? Well, the Law of Dependence indicates it means a lot for human health.

But first, let’s look at how habitat size and species diversity are directly proportional to each other. The relationship between habitat size and species diversity is that the smaller the habitat, the less diversity of species there will be. The smaller the “island,” the fewer species can live there, the smaller their populations can be, and the more vulnerable they are to further disturbance or climate change. There is even a species-area curve showing the relationship between the area of the habitat and the number of species found within that area. For you mathematicians out there, the equation is S=cAz where S = number of species, c is a constant, A = area of habitat in square meters, and z varies depending upon multiple factors, such as location and shape of the area. In other words, larger areas of land will usually contain more species of plants and animals compared to smaller areas of land.

When a habitat is destroyed, the plants, animals, and other organisms that occupy the habitat have reduced their carrying capacity or ability to survive, to the point that populations decline and become extinct. Habitat loss significantly threatens biodiversity. Many species have specific survival requirements for food and shelter that can only be found in certain ecosystems, which, if not provided, will result in extinction. Furthermore, habitat loss can decrease the range of certain species populations resulting in a reduction in genetic diversity and production of infertile offspring. Every day there are fewer places left that wildlife can call home.

Taking this into consideration, E. O. Wilson and other conservation biologists have led a call to conserve half of Earth’s terrestrial area as wild forests, grasslands, and other ecosystems.

The Law of Dependence

Like many sciences, biology has a number of laws. There is the law of natural selection that states that nature selects and favors those individuals with traits that make them more likely to survive and reproduce. There is the so-called law of corridors that governs which species will move in the future as climate changes, and how.

The Law of Dependence states that all species depend on other species. And we, as humans, require hundreds and perhaps thousands of other species in and on our bodies to thrive and survive. In this, we are ordinary. All animal species are dependent on other species. But animals also require a means of acquiring the species on which they depend, especially the microbes on which they depend. Some of those microbes are inherited through birth, while many of the microbes sufficient for our needs are acquired through our daily encounters in our environments – both indoors and outdoors. Unfortunately, environment loss can destroy species that we may be dependent on – for our health, recreation, and food.

Conservation protects more land and water. Having more land and clean water means more habitats, or less habitat loss. As explained at the beginning, more habitats mean a greater diversity of species and a reduced rate of extinction. And as the Law of Dependence suggests, having more species can benefit humans and add to their overall well-being. The net result is that conservation helps the health of the planet and all the species that occupy it, including us.

Ready to fight for land and water conservation and help maintain healthy biodiversity? You can help improve the health of others by getting involved with activities like The Conservation Foundation’s Nature Rx program. As the Law of Dependence says, we can all do more together than we can alone. Join our collective momentum – become a member today!

Feel free to comment on this blog with additional ideas you have on how land and water conservation helps humans.