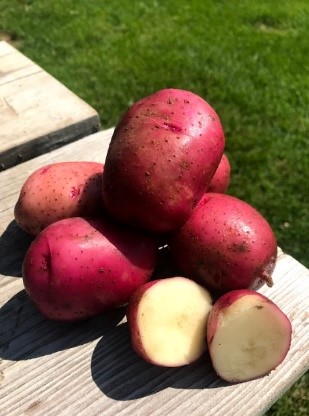 From the beginning, this humble vegetable was worshiped and revered by the Incan empire. Archaeologists have found it buried in ancient Incan burial sites from 500 B.C. along with evidence of ceremonies and rituals honoring it. Although revered, this vegetable was toxic due to the presence of solanine and tomatine, which could not be removed by cooking. In order to eat this highly nutritious and divine food, the Andean people dunked them in a “gravy” made of water and clay, which bonded with the toxic molecules and sent it through the digestive tract without harm to the body.

The potato, affectionately named papas by the Incas and scientifically named Solanum tuberosum, swept across the globe after its discovery in the new world. Since then over 7,000 varieties of potatoes (wild, native, and improved) have been recognized by the International Potato Center in Peru. Without lifting a finger, the potato has dominated the globe. Let’s drop it into history. The potato was first brought to Spain in 1562 by the Spanish Conquistador, Gonzalo Jiminez de Quesada, where it became known as a “tartufo.” Unknown at the time, sailors who ate potatoes aboard the Spanish ships were less likely to suffer from scurvy due to the high levels of vitamin C in the vegetable. 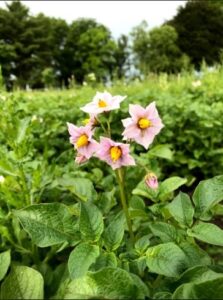 Once in Spain, the potato began to travel to other countries such as Prussia, France, Ireland, and eventually back to the western hemisphere in the United States. Prussia is where the famous relationship between potatoes and the French military chemist Antoine-Augustin Parmentier was forged. Antoine claimed to be fed only potatoes during his war time imprisonment and credits it with keeping him alive. After his release, Antoine became a nutritional chemist. In 1785, Antoine introduced the French court to the wonders of the potato, including King Louis XVI and Marie Antoinette. At this point, many peasants believed the potato to be a lowly food and scorned the idea of eating them; until, Antoine convinced the King to plant 100 acres with potatoes and paid guards to watch over them day and night. This caused a stir among the locals over a plant that needed guarding day and night. Eventually Antoine gave the guards an evening off and to his pleasure the local farmers snuck in and stole potatoes for their own gardens.

Over in Ireland, the arrival of potatoes is still not clear. Whether they washed ashore from a ship wreckage or were brought by a merchant to the queen’s court. Either way, the potato exploded through Ireland and quickly became a major food crop for the country. It also became the suffering of Ireland in 1845 at the start of the Great Starvation/Potato Famine. During the famine (caused by a blight and English insistence on increasing food exports despite the famine) Ireland lost 2 million lives to either starvation or immigration. To this day, Ireland’s population (4.8 million) is still below their estimated population (8.2 million) at the beginning of 1845. Although the potato caused so much devastation for their country, many Irish families still claim the potato as a staple in their diet.

Eventually, the potato business cemented itself in Idaho in 1872 after the Russet Burbank potato was developed; however, that was not the first time the potato had touched Idaho soil. It had originally arrived in 1836 with a missionary and a dream. That dream, and the community support afforded to the missionary was eventually lost to fighting with the Native Americans. To this day, Idaho holds its own in potato production grossing a total of $975 million in 2017 and continues to grow in global popularity. Although Idaho is the United States’ top producer in Russet Potatoes, many home gardeners, local farmers, and other large-scale farms grow potatoes each year. 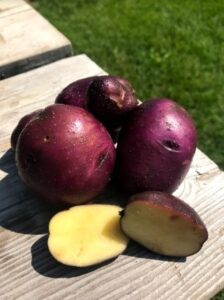 Here at Green Earth Harvest, we love the potato planting season. It is one of the first crops of the year, marking the start of spring, new growth, and warmer days. The week leading up to planting the first potato, our crew works together to prepare over 2 tons of potato seeds consisting of about 7 different varieties from a potato farm in Wisconsin. Together, we sort them by size categories (1 seed, 2 seed, 3 seed, 4 seed) for cutting. Once sorted, we set up our slicing machine and feed the potatoes in to be cut into 2, 3, or 4 pieces (our 1 seed potatoes remain whole). Cutting the seeds is fast paced and exciting! The inside colors of some of our potato varieties are absolutely beautiful. Our goal for each piece is to contain 2-3 “eyes”, which is where the plant sprouts. After cutting, the seeds need a day or two to rest in the cooler so that the cuts can form a dried barrier. This is to help prevent disease from entering the seed once in the soil. The day before, we will pull them out of the cooler to bring them to outside temperature. Finally, planting day has arrived and will be an all-day affair for the crew. Everyone takes turns driving the tractor, placing seed potatoes into their designated spots, and pressing them 4” down into the soil (and then covering them). 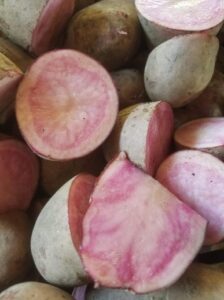 We will continue to watch our potatoes throughout the season and hill them a couple of times before harvest. Hilling a potato is a technique used to prevent sun exposure on growing potatoes and to encourage the plant to continue sending out new shoots underground, thus increasing our harvest yield. Towards the middle of the season, the plants will become covered in beautiful flowers, once highly revered by Marie Antoinette and women of her era. Eventually, the potato plants will begin to yellow and die off. Once the foliage has been dead for 2 – 3 weeks it is time to harvest our glorious spuds!

Our crew will use the tractor to loosen up the soil before we travel up and down the beds digging out potatoes. Searching for potatoes in the soil becomes a mix of competitions such as: finding the biggest potato, finding the most potatoes, and rock or potato. Once harvested into their bins, typically in late August, our potatoes will spend a set amount of time curing to increase the storage life for our shareholders who can expect to see them in their shares from September to the end of the harvest season.

One of our long-term storage potatoes is the Carola variety and if stored properly in the home can last well into spring; as opposed to our short-term Red Gold variety, which is best used in fall and early winter dishes. Some of our favorite ways to eat potatoes are potato salad, mashed potatoes, scalloped potatoes, roasted potatoes and giardiniera, and the ever-faithful baked potato. You can even get fancy with your potatoes and make homemade hash browns or gnocchi!

The versatility of potatoes easily supports their claim to fame.  Though there is still a scientific debate between which of the two wild ancestral plants (Chile or Andean Highland) started the evolution of the potato, there is no doubt that this vegetable has achieved what no human has done before: Global Domination.