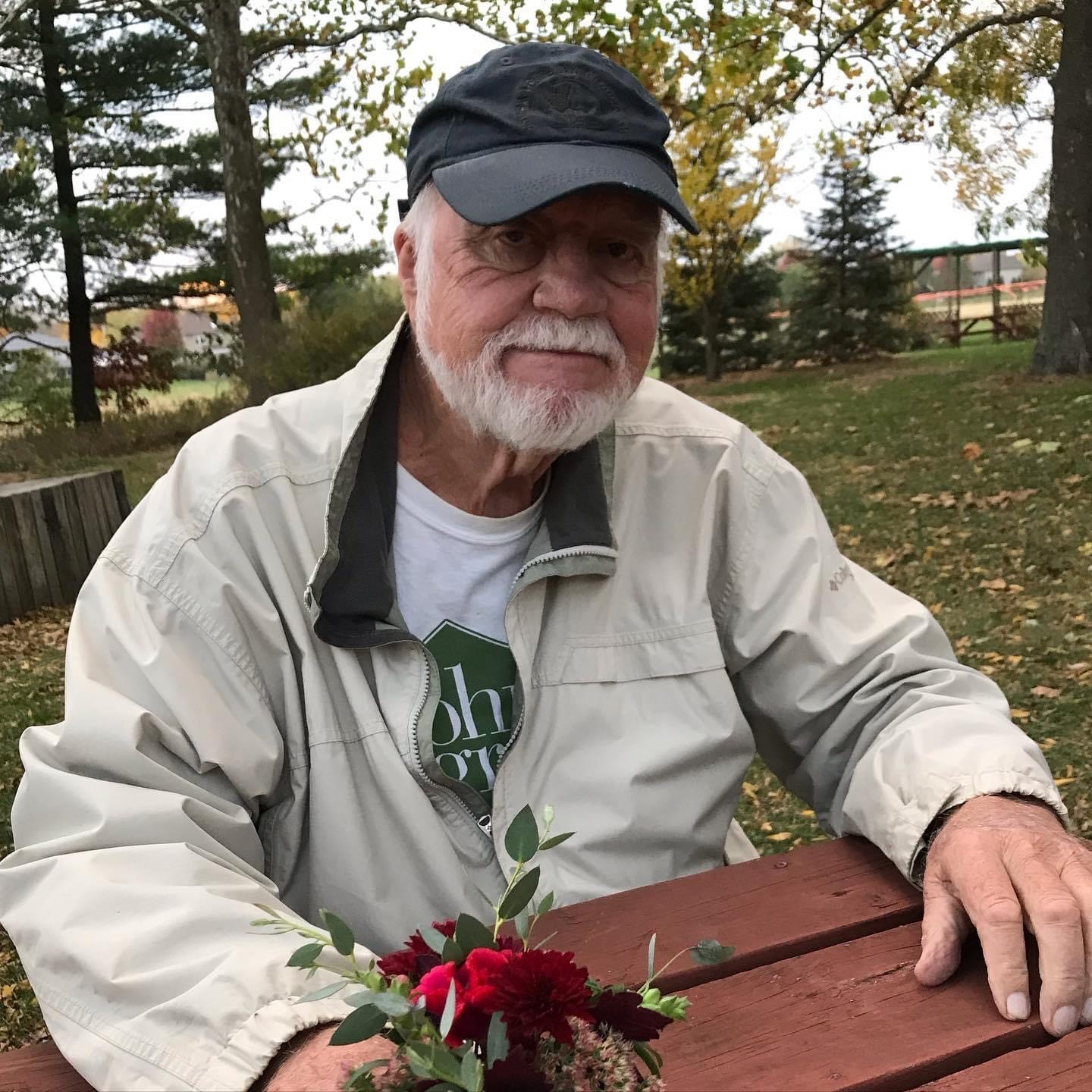 It seems only fitting that McDonald Farm volunteer Bill Dawe should bear such a striking resemblance to Santa Claus!  Though his gifts of time, humor, blood, sweat, some tears and also financial support over the years have been far too much to fit in a big red sack, his involvement with The Conservation Foundation has definitely brought some magic and a certain sparkle to our organization, and especially to our McDonald Farm headquarters in Naperville.

Given the extent of his dedication and the time he has spent at McDonald Farm, one might assume he was a local, serving out of a lifelong connection to the area and the farm heritage.  But actually, Bill’s early life was spent several states away in the mostly urban environment of Kansas City!  When Bill was 10, his parents, Curtis and Jessie Belle Dawe, purchased 10 acres outside of the city that bordered a county park, and Bill’s awakening to nature began.  Not a particularly enthusiastic student, Bill lived for his after-school hours, when he roamed the woods and dipped his toes in the lake.  He credits his nearby grandparents with furthering his fascination with the natural world around him; Grandma was a big flower person, and Grandpa always kept a large vegetable garden.  The family had a couple of goats and a big sow, kept chickens and had a much-beloved semi draft horse that they used to pull the plow and rake for their fields and gardens.  “The only problem with her,” Bill recalls with a grin, “was that she liked to run.  That never ended up being good for equipment, or for riders.”  I get the sense that while the horse’s antics may have led to a couple of bruises and equipment repairs for him, Bill admired her free spirit.

After high school, Bill spent some time in and out of college, earning what he calls “a PhD in life”, and in 1960 he joined the service.  It was during his training for the United States Army’s National Security Agency in Massachusetts that he learned Morse code and other intelligence work, and met his future wife Sandy.  Bill’s duties sent him “across the pond” to England.  Making her vision for their relationship clear, Sandy began sending household goods to him overseas, and one day she herself arrived.  They were wed in Scarborough in the Yorkshire area, and spent their newlywed years together in England until the end of Bill’s three-year Army service.

The couple returned to Kansas, where Bill worked in a furniture store and continued his “unsatisfactory relationship with education”, eventually taking a position with Dun and Bradstreet.  But his life’s most important work began when he and Sandy welcomed two daughters, first Melanie and then Amy.  Eventually Bill’s job led to the family relocating, and they made their new home in Naperville.   Knowing both Melanie and Amy, Bill’s “Daweters” as we like to call them, in adulthood, I know them to both be very attuned and committed to the environment, and Bill says that’s all thanks to their mother.  “I travelled a lot for work when the girls were growing up, but I know Sandy really connected them with nature,” he credited her.

Two decades of hard work later, Bill found himself poised to begin a new phase of his life.  “The environmental part of my life was reawakened when I retired,” said Bill.  No longer beholden to the demands of his career, he was more free to pursue his interests, or just sit on the couch if he so chose.  But he did not choose the couch.  Somewhere around 1998, he saw a little blurb in the paper about The Conservation Foundation hosting a trip down to Midewin National Tallgrass Prairie, he and Sandy joined the excursion, and though they didn’t necessarily know it at the time, they also joined our family.

Feeling like he wanted to become more involved in The Conservation Foundation, Bill went to meet with the staff, three strong at the time, at a little house in Wheaton that held our offices.  He recalls meeting Brook McDonald, who is now our President/CEO, and hearing about a big move the organization was making to a farm in south Naperville that had been donated by a widow named Lenore McDonald.  He dove enthusiastically into turning McDonald Farm into The Conservation Foundation’s home.

One of Bill’s first volunteer tasks was converting the ranch house at McDonald Farm into our office space.  He has very strong memories of the decades-old wallpaper he stripped from the hallway, which he is pretty certain must have been affixed with super glue.  He also helped clean out our 1850s barn and other outbuildings, and was right there hauling boxes and furniture when the big move-in day came!

“I had always kind of wanted to have a farm of my own, with a big sprawling farmhouse, and getting involved at McDonald Farm was kind of a way of having that in my life, without the full responsibility for it resting on my shoulders.  Kind of like being a grandparent,” Bill shared with that characteristic twinkle in his eye.  He also spent time doing natural areas restoration work with the West Chicago Prairie Stewardship Group, a longtime partner of The Conservation Foundation.  And when the Green Earth Institute, a new local organic farming organization, began renting the farmland at McDonald Farm, Bill added yet another non-profit cause to his growing good-guy portfolio.

We could fill pages and pages with all of the things Bill has done over his 25 years of volunteering with us.  He related some of his favorite, or at least most notable, memories, including the famed Pancake Breakfasts and Harvest Moon Socials he and his family helped us put on, clearing brush from around the farm and the resulting epic 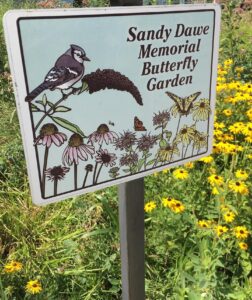 bonfires, and the many, many hours spent along the McDonald Farm fencelines with fellow volunteer Jeff Duncan.  They earned themselves the nickname the “Black and Blues Brothers” through the blood, sweat and tears they left on our Back 40.  Through all of these endeavors, the McDonald Farm became a place of inspiration, connection and belonging for the Dawe family.  I’ll never forget seeing (through my own tears) Bill walking through the farm’s gardens with Melanie and Amy shortly after Sandy passed away, all three of them seeming to find comfort in their shared grief on these peaceful acres.  The butterfly garden in front of our ranch house offices is now known as the Sandy Dawe Memorial Butterfly Garden in tribute to her.

McDonald Farm has certainly changed and grown since becoming our headquarters, and Bill has been there for every new addition and celebration.  “Watching the evolution and expansion of the organization over time, from just three staff and one county to an expanded territory of 7 counties and more staff than I even know has been very rewarding for me as a volunteer and supporter,” shares Bill.  “These are strong indicators our mission’s value to the public.”  Bill feels particularly strongly about Youth Education, and all of the valuable lessons today’s children can learn at McDonald Farm.  That’s why he’s so excited about the addition of the Bill Dawe Family Pavilion to the farm.  Being able to welcome children from all backgrounds and communities, letting them connect to the magic of McDonald Farm the way Bill and his family have, is incredibly important to Bill.  And he is deeply gratified to have his name attached to this important new space.  McDonald Farm is a place where lifelong friendships are born, lifelong dreams are realized, and lifetime lessons are learned, thanks to the dedication of volunteers like the incomparable Bill Dawe.

Would you like to support making the Bill Dawe Family Pavilion
a reality at McDonald Farm?