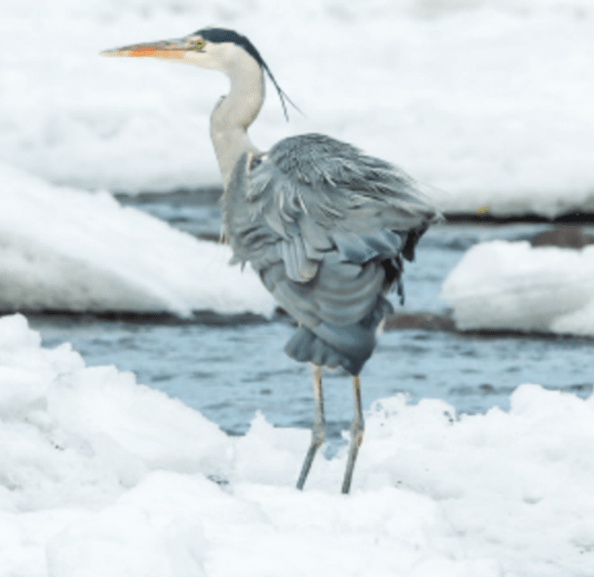 Winter in Illinois means snow and usually a lot of it. Good for recreation if you like skiing, snowshoeing, making snowmen, and throwing the occasional snowball. Not so good for driving or shoveling. But snow actually plays an important role in climate change, and conservation plays an important role with snow. And that is today’s winter’s tale.

Inspired by The Last Winter by Porter Fox, a book about climatology, ice, snow, and winter; our winter’s tale begins with snow.

So, what exactly is snow? According to the National Snow and Ice Data Center (yes, there really is a National Snow and Ice Data Center), snow is precipitation in the form of ice crystals. It originates in clouds when temperatures are below the freezing point (0 degrees Celsius, or 32 degrees Fahrenheit), when water vapor in the atmosphere condenses directly into ice without going through the liquid stage. Once an ice crystal has formed, it absorbs and freezes additional water vapor from the surrounding air, growing into a snow crystal or snow pellet, which then falls to Earth and forms a snow cover.

The story continues with the conflict between snow and climate change. Both affect each other.

Seasonal snow is an important part of Earth’s climate system. Snow cover helps regulate the temperature of the Earth’s surface, and once that snow melts, the water helps fill rivers and reservoirs in many regions of the world, especially the western United States. Snow’s albedo, or how much sunlight it reflects back into the atmosphere, is very high, reflecting 80 to 90 percent of the incoming sunlight. By contrast, trees, plants, and soil reflect only 10 to 30 percent of sunlight. Snow cover wields the largest influence during springtime (April to May) in the Northern Hemisphere, when days become longer, and the amount of sunshine increases over snow-covered areas. Snow’s high reflectivity helps Earth’s energy balance because it reflects solar energy back into space, which helps cool the planet.

The thermal properties of snow have important consequences for climate, as well. Snow acts like an insulating blanket. Beneath 1 foot of snow, the soil and the organisms within it are protected from changes in the air temperature above the snow surface. Snow’s cold, moist surface influences how much heat and moisture circulate between the ground and the atmosphere. Snow helps insulate the ground below, holding in heat and preventing moisture from evaporating into the atmosphere.

On the other hand, changes in climate can affect how much snow falls and influence the timing of the winter snow season. Between 1966 and 2010, the amount of land and sea ice that is snow-covered each year has decreased over many Northern Hemisphere regions (in some areas by as much as almost 50%), especially during the spring snowmelt season.

Scientists are modeling how Earth’s climate might change over the next 100 years, and the results suggest that snow will cover less of the planet, particularly over Europe and Asia. Climate warming can reduce snowfall and cause earlier spring melts and shorter snow cover seasons.

Changes in the amount of snow covering the ground, and changes in how the snow melts in the spring, will affect the water supplies that people use for things like farming and making electricity. Retreating glaciers and decreasing snowpack are prompting concerns about dwindling water supplies throughout India and southwest Asia.

As you can see, the loss of snow would have a negative effect on our climate. To quote Jon Riedel, National Park Service geologist at North Cascades National Park: “The loss of snow affects the water supply, but it also affects the ecology in other ways – not just forest fires but the growing season, pollination, hydropower, freshwater supply, river habitat, and myriad other effects because climate affects everything.”

However, thanks to conservation, this tale ends on a positive note.

Healthy landscapes and ecosystems are natural and efficient carbon sinks, storing carbon in plants and soils. Land conservation ensures that this land will continue to sequester carbon, or store carbon in one place. Plants use greenhouse gases (including atmospheric carbon) during photosynthesis and, in turn, remove these gases from the atmosphere, trapping them within plant tissues and into the ground. By conserving tracts of land with trees, bushes, grasses, and shrubs, we are increasing carbon storage and allowing plants to remove greenhouse gases from the atmosphere.

In fact, land conservation offers a double benefit for the climate. The Land Trust Alliance states that land conservation not only helps absorb greenhouse gases; it also prevents significant greenhouse gas emissions that would result from development — including deforestation, construction, and the additional driving required by poorly planned growth.

And that is the end of this winter’s tale.

So how can you contribute to conservation efforts that help counter the effects of climate change and the loss of snow? Well, land and water conservation are what The Conservation Foundation does every day in every season — winter, spring, summer, and fall – and they have been doing that for 50 years. We can all do more together than we can alone. Join our collective momentum – become a member today!