3 Things That Don’t Suck About This Winter

First, let me apologize to my mother.  "Suck" was a forbidden word in our house!

Now, let’s talk about this winter we’re having, one of historical severity.  On the rare day that it isn’t snowing buckets, it’s too dang cold to get out and enjoy the powder for long without losing a finger or worse to frostbite.  It’s been a bit harsh and tiring, no denying it !  But I can think of at least a few bright spots in this seemingly endless stretch of frozen days.

This year’s tundra-like winter cloak has attracted record numbers of several avian species not frequently seen here, and given even the most casual observer glimpses of some charismatic mega-feathered.  I’ve seen dozens of Bald Eagles in the course of my everyday travels and reports keep rolling in of regular sightings all up and down the Fox River, among other places.  I also saw red-breasted mergansers, an arctic duck species, on the Fox in Yorkville.  And several of our staff members and Facebook friends have had the distinct honor of spotting the stunning snowy owl.  Despite a borderline obsessive search, I have not as yet been one of the lucky ones to see this beauty, but I’m holding out great hopes of doing so before the snow stops flying.  Our good friend Pam Otto of the St. Charles Park District has written a rather excellent column on the irruption (that’s the migration or movement of large numbers of a species to a place they don’t normally winter) of snowy owls our region is experiencing this year.  Read it here.

Refreshing doesn’t begin to describe the feeling when you summon your inner John Muir and trek out into the elements.  We’ve actually worn a hole  through one sled and popped another in our enjoyment of the season’s offerings.  I’ve stopped short of climbing to the top of the tallest tree during a storm, but my mom, my five year old and I did take a most magical night walk during the snowstorm a couple of nights ago.  I won’t lie, it took some convincing to get me off the couch and into snow pants after a long day of meetings and a dicey drive home, but what an ethereal and utterly enlivening experience!!

3.  Being Forced To Slow Down

This one can be a double-edged sword during a time of year that tends to leave many people feeling blue even in a mild winter.  But instead of giving in to feelings of isolation, I’m trying to embrace the extra home time that has resulted from school closings and cancellations of work and social activities due to the weather.  I’ve read more, sipped more hot chocolate  and spent more deliberate time just playing with my girls because other plans have fallen through.   Admittedly there is a fine line between getting snowed in and bonafide cabin fever, but I haven’t hit it yet.  If you have, come on over.  Staff member Tara Neff and I are planning to do a puzzle and you can join us!

There have been hardships aplenty this winter, it’s true.  But it’s given us some unique opportunities, and lots of stories to tell.  And we are utterly powerless to control it, so we may as well set about the task of enjoying it.

See you on the sledding hill! 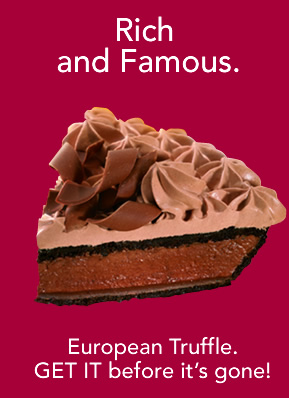 PS-Bonus happy thing – the best.pie.ever. is at Baker’s Square this month.  If you need a cure for the winter blues, bundle up for a snowy hike and treat yourself afterwards to the chocolatey slice of heaven known as European Truffle Pie.  It’s a favorite of our staff!  And Baker’s Square has nothing to do with this endorsement.  I do it out of the goodness of my heart…and the goodness of their pie!